Soldiers dispose of Trixie-infected bodies, burning them in flames that hover somewhere between the screen and the audience

American independent filmmaker George Romero excelled at crafting genre films from outside the traditional studio system that offered social critique on contemporary American culture. Romero’s mastery of the cinematic form allowed him to use the traditionally ‘low’ form of genre film, horror, to address racism, imperialism and anti-war themes in a way that revolutionized the genre’s potential. His 1973 film, The Crazies, a critical and commercial failure upon release, frames the American Government as responsible for America’s moral decay. Romero’s low-budget, documentarian style of filmmaking grounds the fantastical elements of The Crazies and allows the horrific implications of the narrative to unfold naturalistically. Then by isolating characters within the frame, Romero implicates those in power as uncaring and disconnected from the consequences of their actions.

In The Crazies, a biological weapon created by the United States Government accidentally infects the drinking water of Evans City, Pennsylvania leading to an outbreak that threatens to overtake the entire continent. Army Colonel Peckhem (Lloyd Hollar) and government scientist Dr. Watts (Richard France) attempt to contain the virus from within Evans City while a small gang of survivors led by David and Clank (Will McMillan and Harold Jones), two Vietnam war veterans, attempt to escape the military imposed quarantine. After beginning the film with an example of ‘crazy’ behavior, a father burning down his family home with his two children inside, Romero introduces a “Trixie task force”—a collection of political advisors, bureaucrats and an Army General who attempt to coordinate the response to the outbreak. Within this scene, Romero presents the government’s disastrous handling of Trixie as being equally horrific to the ‘craziness’ embodied by the infected.

Romero’s budgetary limitations are made clear in the opening medium shot: the task force meets in a cluttered and disorganized office rather than an elaborately decorated and impressive situation room. This low-budget mise-en-scène immediately undermines whatever confidence the audience might have had in the task force’s ability to control the Trixie problem, as the ramshackle room reflects their unprepared and disorganized response. As the task force argue about the best solution to solve the Trixie problem, Romero heightens their discordance by framing the men in a series of increasingly tight close-up shots, reflecting their lack of communication and inability to see how their actions are perceived by the people of Evans City. After the establishing medium shot where the men briefly share the frame and the space, Romero frames the men in isolated close-ups, each man viewed from the upper body up, before each cut brings the camera closer until each man is framed in an extreme close-up with their face dominating the frame. The shared space is juxtaposed with the framing of each man isolated from the others as their physical isolation within the frame reflects their inability to consider each other’s ideas and how their actions will impact the people of Evans City.

As noted by Tony Williams, the all-American cast of characters in The Crazies are both “occupier and occupied, soldier and civilian, exploiter and exploited”. The ‘protective’ government, as represented by the Trixie task force, uses the same blunt-force military tactics of communication black-outs, annexation of sovereign territory and rejection of local authority as they would use in a wartime invasion force. The task force orders the occupation of Evans City but symbolically, as elected representatives of the American people, are now occupied themselves after turning the might of the American war machine inwards. To heighten the horror of the power wielded by the task force upon the American people, Romero intercuts shots of the men with stock footage of military personnel preparing a plane for take-off. Backed by a military drum-beat, and seemingly before the task force has even issued the order, the montage shows a nuclear bomber fueled, taxied and up in the air ready to wipe out a city for ‘national security concerns’. Romero’s use of the military stock footage within the extremely fast paced montage sequence contrasts the task force’s over-eagerness to wield unfathomable power with their inability to consider the consequences. This dissolution of organization within the state speaks to the American mood of disillusionment in the 1970s following the Vietnam War, which the American people viewed as both an organizational and moral failure. Within The Crazies, individuals like David and Clank, two men who served their country as soldiers and continue to protect their community as firefighters, are seen as expendable compared to the abstract national security concerns of the task force. Within this early scene, Romero clearly demonstrates the moral decay present at the upper echelons of the American state and throughout the film, that decay will seep downwards, ultimately infecting rank-and-file troops, poisoning them into sharing the task force’s perspective of human life. 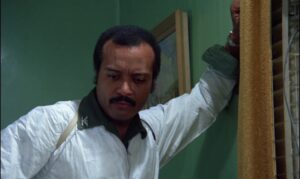 Colonel Peckhem (Lloyd Hollar) tries to supervise the effort to contain the outbreak in Evans City, only to encounter institutionalized dysfunction

As The Crazies progresses, David and Clank struggle to escape Evans City, while Colonel Peckhem barely maintains order within the town as more residents are infected with Trixie. Romero cuts to stock footage of the nuclear bomber above Evans City, a reminder for the audience that the ultimate destruction of Evans City is a potential outcome if Peckhem’s efforts fail. Underscored by the same military drum beat as used in the earlier montage sequence, Romero shows the main street of Evans City occupied by mask-wearing soldiers, all clad in the same white jumpsuit. In contrast to the earlier framing of the task force members that isolated them from each other, Romero now shows a group of soldiers lining the streets of Evans City, all sharing equal presence within the frame. If the task force members were allowed the opportunity for dissenting opinion because of their political power, the rank-and-file troops fulfilling their orders are allowed no such moment of individuality or resistance. Their complicity with the toxic attitude of the task force is not one they have a choice in, and so they share the burden and position within the frame, committed by oath and duty to follow orders in the name of national security. Yet while the task force is never shown facing any meaningful consequence of their blundered efforts, Romero shows just how an individual among the many can snap under pressure.

Beside Colonel Peckhem and Major Ryder (Harry Spillman), no member of the military in The Crazies is substantially characterized yet Romero is still aware of the humanity beneath the gas masks and allows a brief but violent glimpse of the moral conflict potentially lurking in the heart of every soldier. Starting at a close-up of a watch being removed from an arm by a soldier, Romero pulls the camera back to reveal a pile of body bags burning in the background. In the earlier evacuation scene, Romero allows the soldiers isolated moments of compassion, a soldier allowing a little girl to grab her doll, but now all sense of compassion and identification with their fellow citizens is gone. The soldiers, standing casually left of frame as their comrades loot and burn,  have now adopted the position and mentality of the task force where individual human life, regardless of civic or national ties, is rendered meaningless. The soldiers are undistracted in their looting efforts by their destruction of their fellow citizens being tossed into a pyre but a lone figure breaks away from the group, removing his mask while screaming “I gotta get outta here!” It is not outlandish to suggest that this unmasked, screaming soldier could just as well be suffering a mental break following his realization of his complicity in the military’s action as it is to say his behavior is Trixie symptom. The frantic handheld shots combined with the identical low-budget costumes and lack of characterization of individual soldiers make it initially unclear who exactly is going crazy and who is remaining sane.

Throughout The Crazies, Romero leaves the true definition of ‘crazy’ behavior open to interpretation. Robin Woods states that the relationship “between normality and the Monster” creates horror, and The Crazies creates political horror by blurring the line between what is monstrous and what is normal through framing and low-budget mise-en-scène. Depicting monstrous actions of the task force and the soldiers as normal and the soldiers’ refusal to follow orders as abnormal and ‘monstrous’ creates a palpable sense of political horror. If looting and burning bodies is considered normal behavior, the audience speculates as to what new monstrous actions the United States Government would be willing to undertake and then frame as normal. As the soldier attempts to escape, Romero frames him in the background, the looming figure of the flamethrower-wielding soldier dominating the center frame. Now the destructive power of the state, previously just used to dispose of civilians, will be turned against the soldier who, while on fire, keeps repeating “I’m getting out of here” as his comrades turn on him, watching him burn to death. In this scene, Romero aims to mirror the audience response he created in the initial task force scene. Both figures of authority with power of the individual, the task force and the soldiers, turn inward to reject the community in favor of  blindly ‘just following orders’ to protect ‘national security’ without considering the social implications of their actions. The cheap white jumpsuits and face masks worn by the soldiers are likely a result of a cheap solution to outfit extras that could be reused from scene to scene, but, here again, the film turns its lack of resources to its advantage for thematic purposes: the identical mirroring of the soldiers uniforms and the masking of their faces further destroys their individuality.

The lone figure who acts as a bridge between the total, dehumanizing power of the state and the faceless soldier following orders is Colonel Peckhem. Despite the absolute failure to maintain control over Evans City, the task force congratulate Peckhem on a job well done and, via an isolated voice over the radio, order him to ship out to Louisville to handle the Trixie situation there. As he is winched into a helicopter as the credits roll Romero lingers on an aerial shot of evacuation flares allowing the audience time to contemplate what has been learned or gained throughout Peckhem’s mission. With the cure for Trixie inadvertently destroyed and the task force issuing identical orders, Romero presents an unchanging cycle of normalized yet monstrous violence and dehumanization wielded by the state against American citizens.

Williams, Tony. The Cinema of George A. Romero: Knight of the Living Dead. Columbia University Press. 2015.

Wood, Robin. “The American Nightmare: Horror in the 70s”. Hollywood from Vietnam to Regan…and Beyond, Columbia University Press, 2003, pg. 63-84.