When planning Homegrown, I wanted to make a monster horror film, but I also knew this would be a challenge, especially with a limited time frame and college student budget. I originally planned a vampire-conversion film resembling early monster films like Nosferatu (F.W. Murnau, 1922) embracing gothic noir aspects of deep shadows and stark lights. Due to time, budget, and personnel limitations, the monster was forced to evolve into something more feasible onscreen.

As I began searching for a new monster, I was inspired by my windowsill houseplants to create an ecological horror entity. I started planning a film built around practical effects, a creature made up of plant matter designed to be a spectre of vegetation only seen in the shadows. This monster would be represented primarily through vine appendages, disembodied and tentacled extensions of the larger entity.

When choosing how to represent this creature, I wanted to create a sense of horror focused around dread rather than explicit fear or violent imagery. In her essay on horror, Cynthia Freeland writes “dread, unlike anxiety, involves an anticipated encounter with something ‘profound’ — something particularly powerful, grave, and inexorable … a threat that is not only unidentified and powerful but also unnerving because it is deeply abhorrent to reason” (191-192). I wanted to spend the majority of the film building this sense of dread and impending doom through glimpses of the creature—vines twisting through the darkness, creeping and surrounding the protagonist.

The music and the sound effects build as the protagonist sleeps, completely unaware of the potential danger. I used the concept of a nightmare as a midway release point of this tension, a moment for the audience to breathe and to question the reality of the creature. This moment is brief, and the tension almost immediately returns as the monster is revealed to have been real after all. As we realize the protagonist is still in danger, the final bit of tension culminates in a reveal of the monster, a vegetative humanoid with piercing, glowing eyes.

The uncanny horror of unnatural plants has been portrayed many times in film, from the carnivorous plant of Little Shop of Horrors (Frank Oz, 1986), to the demonic tree of The Evil Dead (Sam Raimi, 1981). Portraying plant life as malevolent, intelligent, and aggressive builds a general feeling of the uncanny. Plant life is a familiar thing all around us, growing slowly, staying relatively still, and rarely causing harm. The high-speed crawling movement of the vines, a complete departure from the normal stillness of plants, stands out to the audience as unnatural and uncanny.

Freud defines the uncanny effect as frightening things that lead back to something with which we are familiar.  My goal was to break the connection between the traditional understanding of a plant’s nature and how they exist in the world of the film, to add dimensions of dread and horror to the film experience. The strange behaviors of the vines in the film—speed, aggression, invasion under blankets and over the face and eyes—preys on our human fear of nature invading our shelter.

In his essay on The Innocents (Clayton, 1961), John C. Tibbetts quotes Henry James, “so long as the events are veiled the imagination will run riot and depict all sorts of horrors. . . but as soon as the veil is lifted, all mystery disappears and with it the sense of terror” (104). Similar to The Innocents (Clayton, 1961), I wanted to use the veil of ambiguity to question the reliability of the protagonist, while also having the opportunity to tear the veil away to reveal my monster. In the end, the moment is brief as our protagonist startles awake, as if from a nightmare, to a well lit and otherwise peaceful bedroom. The monstrous vines are (almost) completely gone, and he believes he imagined the entire sequence.. I immediately break the moment when he swings his legs off the bed and steps onto a straggling vine, which slowly pulls away to escape under the door. The ambiguity and doubt is quenched—the monster must be real.

I chose to withhold the monster until the very end, particularly to raise more questions outside the space of the film. Is the monster part of the plant the protagonist stole from the forest? Is it a spirit of the forest, here to enact revenge for greedily taking a part of nature? Is it all a nightmare? I wanted these questions to increase the fear of the monster, without fully removing the veil of ambiguity, as Henry James called it, which allows the audience to imagine something far scarier than what I could conjure up on screen.

Tibbetts, John C. “The Old Dark House: The Architecture of Ambiguity in The Turn of the Screw and The Innocents.” British Horror Cinema. Edited by Steve Chibnall and Julian Petley, Routledge, 2009. pp. 99-116. 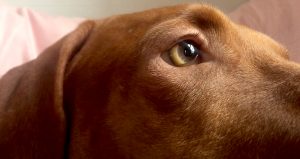 In making a short essay film which took my darling dog as its subject, I wanted to make sure of a few things. I wanted to avoid a chummy, feel-good home video that forsook the complexities and depths of my shared life with Vincent. I also wanted to make sure that I didn’t take my subject too seriously, and wander into a swirly ramble about animal life—a topic I have spent much of college thinking about deeply and philosophically, and which I find grounds for very rich thought. However, I think I erred on the side of serious and philosophical, and I hope this is forgivable in light of how dear and serious this topic is to me. Finally, I was also wary of speaking for my dog in a way that was irresponsible and childish, frankly. Expanding the conceptual scope of the film to my relations with animals more broadly, instead of just with Vincent, hopefully offers some perspective on the topic while also demonstrating the care I want to take in relating to all animals.

In beginning this project, I didn’t realize just quite how much relevant footage I had captured over the course of many years of travels, and quotidian documentation of my life. I was very pleased with how much footage I was able to pull from previous years and adventures, which I think makes the film more interesting and gave me much more material—literal and conceptual—to work with. It also took the pressure off of filming during this semester, and skirted the issue of ending up with all relatively similar footage of my dog. Thus grew the project from a focus on my dog only to a contemplation of my life with animals more broadly.

The voiceover was the last element to be completed and I was resistant to it for a while because of insecurity of hearing my own voice in a powerful, direct way, frankly. I worry still that it is too much of a monologue and not a dialogue. The “you” I address in my film is my dog—and so my interlocutor is both inside and outside the film. But my interlocutor(s) (my dog and other animals) have no way of replying to me by language and engaging in a conventional dialogue. This is a tricky place to be in as the filmmaker. Although I think my voiceover invites viewers into a line of thought or questioning, it does not address them directly and interpolate them. It is more self-questioning, exploratory, and intellectual in a way that aligns with the voiceovers of essay films directed by Chris Marker, Harun Farocki, Agnès Varda, and others. It is also playful in moments, I hope.

Not that all essay films have voiceovers, but I felt that this was one of the most accessible ways for me to make my film essayistic. The images in my film are also essayistic in that they do not form discreet scenes and aren’t chronological or continuous. The footage draws from places I’ve travelled over several years: Palau, Fiji, South Africa, New Mexico, Maine, Vietnam, and North Carolina. This global scope, which I am lucky to have accessed in previous years, relates my film to other essay films which were born of a globetrotting filmmaking career—I have in mind Kristin Johnson’s Cameraperson (2016) and Marker’s Sans Soleil (1983). From those two films I borrowed the intermittent use of black leader to signal a pause or change. My film is in a few parts or chapters, organized by similarity of shots and themes. I would call the sections: water, land, sky, domestic animals, wild animals, dogs, Vincent. The film moves from the universal to the specific, and invokes the idea of evolution early on to parallel this directionality. Finally, although I set out to make a portrait of my dog, this project ended up taking on larger ideas.

I was also inspired by the work of Terrence Malick, which I say modestly, because I know it can’t achieve such a level of beauty and artistry. Nonetheless I hoped my images and voiceover would bring viewers into a similarly poetic, musing, awe-struck kind of state—which is at least what I experience when watching Malick’s films. I of course also wanted to honor Montaigne’s original essay project, which was fundamentally linked to his relationship with a friend, Étienne de La Boétie. In making a film about my dog, I am also thinking about friendship, specifically that which exists between humans and extra-human creatures.