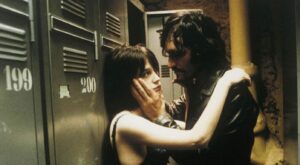 When Claire Denis’ Trouble Every Day first premiered at a midnight screening in competition at the 2001 Cannes Film Festival, the film met with aggressive booing from a confused crowd. There were multiple reported walkouts and two audience members fainted, infamously prompting ambulances to arrive at the theater. At the time, many critics were not fans. Peter Bradshaw of The Guardian dismissed the film as “silly” and lacking focus while Derek Elley of Variety was less kind, calling it “over-long, under-written, and needlessly obscure,” full of “shock value and intellectual pretension.” I felt similar to these early-aughts critics after I first watched the film. It’s built on a monotone lead performance with the pacing of a slowly dripping faucet, and it doesn’t seem concerned with explaining much of the plot. After a few days, however, the film’s themes and textures stuck in my head and grew. Within a week it had planted a seed that ached for reassessment. The critics evidently felt the same; over twenty years later, multiple publications have since revisited the film as a unique highlight, if not a necessary stepping stone, in Denis’ career. While some of the film’s earliest criticisms may still hold true, many of them overlook the silent, subtle conversations at the heart of Trouble Every Day.

At the turn of the century, Claire Denis was seen as an artistic force to be reckoned with. With the release of Beau Travail in 1999, the French filmmaker was catapulted to arthouse praise and festival audiences wondered how she would follow up a film hailed as a masterpiece. What nobody expected was the semi-erotic, pseudo-horror, slow-burn nightmare that is Trouble Every Day. The film is about two relationships: one old and one new; but both inextricably linked to the past. Vincent Gallo stars as Dr. Shane Brown, a decadent and detached American in Paris bringing his sweetly innocent new bride June (Tricia Vessey) on their honeymoon. In reality, Shane has come to the City of Love to find Dr. Léo Semenau, a neuroscientist he formerly worked with and whose wife, Coré, he had an affair with. At the same time, Coré (Béatrice Dalle) breaks out of her room and into the night, luring men into the wilderness where she devours their bodies without restraint. Léo (Alex Descas, a regular collaborator with Denis) arrives at the scene, digging the graves of Coré’s victims and lovingly carrying his blood-stained wife back home, locking her up until she inevitably escapes to feed again. Shane and Coré are two souls struck with the same affliction: an incurable, insatiable libido amplified so extremely that it manifests itself in the mastication of flesh.

Shane’s search for answers to his newfound lust results in an especially haunting scene when he breaks into Coré’s house, finding her just after she devoured a new victim—blood smeared on her face, nightgown streaked red, in a sort of demented bliss. Shane is doomed to follow in Coré’s footsteps, but their link is strengthened when details of their past affair are revealed. In a scene around halfway through the film, a character asks Shane if he believes in loyalty or if he believes in betrayal. While Shane struggles to believe in loyalty, he increasingly finds himself wanting to betray June. He is drawn back to Coré, to the affair they once had, and this is what leads him down his path of violence and cannibalism. The film examines the long-term symptoms of betrayal, suggesting that Shane and Coré’s thirst for flesh may have its roots in the infidelity they once indulged in during their affair. 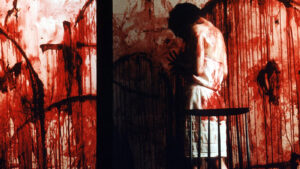 Of course, like many Claire Denis films, Trouble Every Day isn’t concerned with exposition. Instead, the film seems more focused on creating atmosphere and conveying emotion. Denis keeps the camera near to her characters, an uncomfortably intimate closeness that echoes the film’s themes of emotional and physical proximity. We see the world through point-of-view shots: eyes pointed down at the floor, shakily focused on the rug or the shoes of the person across from them. These shots serve as an insight into the characters’ anxiety and nerves, bringing the viewer closer to their headspace. The interior scenes the characters inhabit are cold and sanitized; Shane and June’s spotless hotel room obediently made daily by the hotel maid, and Léo’s laboratory, full of whirring machines and computers. These spaces seem to reflect how the characters struggle to hide their internal turmoil under their clean and sterile exteriors. This is amplified by the performances, specifically Vincent Gallo’s. In every scene, Gallo appears to be holding himself back, as if he may just lunge out at whoever is around him. His performance feels stifled by a lack of expression and toneless line delivery. Sometimes this works in the film’s favor to illustrate the character’s lifelessness. Other times it feels quite alienating to the audience, like there’s nothing to understand about the character. Perhaps this was Gallo’s intention. After all, the character drifts through the days and struggles to connect to anyone, even his new wife June (one of my favorite scenes involves him buying a tiny puppy from a shop window to apologize for running away from her). In the end, however, Gallo’s performance hides more than it reveals about the characters, and not in a way that feels satisfying.

Trouble Every Day has been labeled a horror film, but the traditional “horror” aspects of the film come from its climaxes: two separate scenes both depicting Shane and Coré satisfying their hunger by enticing and attacking guiltless strangers. Coré seduces a young man who breaks into her house to free her only to feast on him soon after the two embrace. Shane corners the young hotel maid who has shared innocent glances with him throughout the movie—a clear sign of an innocent crush. The real horror of the film comes in the skewering of something sweet and harmless into something gruesome and violent. Denis presents these scenes in stark contrast to the rest of the film. The attack scenes are in grimy, dimly lit basements and bedrooms rather than the sanitized hotel rooms and laboratories of the rest of the narrative. Covered in dirt, the texture of these rooms meshes with the scarred, bloody texture of the victim’s flesh. Their moans of pleasure soon turn into high-pitched squeals of terror as they’re overtaken and powerless to stop their attackers, a direct opposite of the soft, whispered dialogue that predominates the film.

Something that few other reviews or articles about the film seem to address is the way the movie depicts sexual violence. Despite the extreme circumstances of their desires, the two characters are still sexual predators at their core, roaming the streets of Paris nightly looking for potential victims. The film depicts the wide range of what defines sexual assault, from Shane forcing himself up against a woman on the metro to him quite literally devouring a young girl. Unsurprisingly, it makes Trouble Every Day a hard film to watch. While the rest of the film is a methodical slow burn that admittedly could have been quicker, those two attack scenes—the ones with actual action in them—are the most difficult to sit through. It makes sense that this is one of Denis’ most polarizing films; while she’s not asking the audience to care for Shane and Coré, she is asking the audience to understand and follow along with two characters whose desires lead to eventual physical and sexual violence.

It’s hard to pin down what exactly Trouble Every Day is. As viewers, we look to place films into boxes so as to organize our tastes into listable categories. Trouble Every Day’s lack of genre identity is where it succeeds. Initially, it was panned by arthouse audiences for being too gory and disturbing and it was rejected by horror fans for being too artsy and slow. The film hasn’t had it easy, but Denis has always been a filmmaker who defies genre conventions, and Trouble Every Day is just another example of this. I would call it a romance film—but one looking at the darker side of love that perhaps lurks under desire as a whole. The film examines lust and infidelity as if they were diseases, with root causes and diagnosable symptoms. Shane and Coré’s incurable desires sprouted from their affair and ultimately drives both of them to violence and self-destruction. Maybe for some, lust really is a sickness that can trample all other emotions and come out on top, turning once-regular lovers into street-stalking monsters. It’s a discomforting reality to imagine, but it might be closer to reality than many would think. Denis handcrafts that world and presents it all—the love and the horror—with the utmost intimacy.