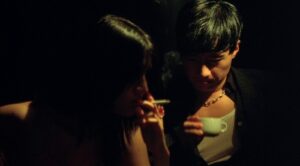 In the opening scene of Hong Kong filmmaker Wong Kar-wai’s 1995 romance-crime drama Fallen Angels, a woman working for a contract killer (Michelle Reis) hesitantly asks her business partner (Leon Lai) about the status of their working relationship. In response, the killer explains through voice-over narration, “partners should never get emotionally involved,” a statement that captures the cold sense of detachment that lingers throughout and between the nocturnal inhabitants that populate the film. The characters of Fallen Angels are lonely souls, aimlessly traversing dingy tunnels and endless highways searching for purpose, yearning for connection but never reaching it fully. Bound within the confines of their melancholy world (as well as within the film’s warped anamorphic aspect ratio), they helplessly fall victim to fate, running into past co-workers, old lovers, and partners whose comforting presence comes inevitably sealed with an expiration date. The film follows these individuals as they wander the night, attempting to navigate the labyrinth of both their neon-tinged surroundings and their relationships, whether they be professional, familial, or romantic.

Visually, Fallen Angels is dizzying. Only a few static shots occur throughout the entirety of its 99-minute runtime. Wong’s images are frenetic, dynamic, and disorienting, haphazardly switching between moments of time-lapse and slow motion, as well as between color and black-and-white imagery. The film is infused with a general atmosphere of haziness, with deep greens and reds that emanate from city street lights and fluorescent signage. This sense of haziness that envelops the film is particularly evident in a scene where the killer’s agent visits a bar her partner frequents. As she silently yearns for her partner in the dimly-lit locale, she sits across from a mirror that refracts her image, scattering her figure and conveying her detachment from both the world around her and herself. The film also communicates this feeling of disconnect through its unique visual style. Throughout the film, Wong and cinematographer Christopher Doyle employ extreme wide-angle lenses that give nearly every frame a slight fisheye effect. This, in combination with the film’s wide 2.39:1 aspect ratio (on the 2021 Criterion Collection digital restoration), visually alienates the characters from their environment, especially in closeups. 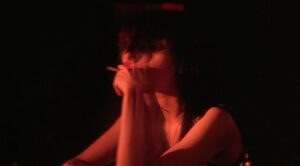 The story of Fallen Angels is bifurcated, revolving around two loosely connected stories held together by only a few casual run-ins and names brought up in conversation, both set against the backdrop of Hong Kong at night. In this way, the film feels less controlled compared to Wong’s previous work featuring two interconnected stories set in Hong Kong, Chungking Express (1994). While Chungking Express presents its two stories in sequence (with a scene around halfway that effectively serves as a transition), Wong crosscuts between the two plotlines throughout Fallen Angels, generating a loose and crisscrossing narrative. What the two films share, however, is the setting of Hong Kong itself, which, according to an interview with Wong, is the main character of both—each film individually representing the bright and dark of the city. This is especially interesting considering that Wong had originally intended for Fallen Angels to be the third story in Chungking Express. Wong’s cinematic nocturne features back alleys, dingy apartments, and maze-like tunnels illuminated by a blur of brake lights, television screens, and McDonald’s advertisements. Fallen Angels is, through and through, a city movie.

Of all the dynamic performances on display in the film, the one that deserves considerable praise belongs to Japanese-Taiwanese actor Takeshi Kaneshiro. Kaneshiro’s character is a mute delinquent, whose dialogue is conveyed solely through off-screen narration. As such, Kaneshiro brings a tremendous physical presence to the role, as he’s able to express so much emotion through his body movements, posture, and facial expressions. Like Faye Wong’s character in Chungking Express, Kaneshiro’s antics provide an otherwise melancholy film with numerous moments of levity and even a considerable amount of comedic relief. Leon Lai’s disillusioned hitman and his stoic personal agent, played by Michelle Reis, fit right into the seedy underbelly that the film portrays and form the central relationship that the story emotionally hinges upon. Finally, Karen Mok and Charlie Yeung play two women that the male protagonists incidentally encounter over the course of the night, both of whom give memorable and energy-filled performances. And, of course, one can’t forget to mention the performers featured on the film’s eclectic soundtrack, which includes a mesmerizing cover of the Cantopop track, “​​​​​​Wang Ji Ta (Forget Him)” by Shirley Kwan that haunts the screen long after it ends.

In the final and perhaps my favorite scene from the film, Reis’ agent and Kaneshiro’s delinquent are seemingly brought together by fate one night. While they’ve had their fair share of run-ins in the past, something is different this time—there’s a spark. As the pair speed down an empty highway tunnel on the delinquent’s motorcycle to the Flying Pickets’ “Only You,” Reis says in a voice-over, “at that moment, I felt such warmth.” As the camera slowly pans up from a shot of her head gently resting against the delinquent’s shoulder, the two emerge from the darkness of the tunnel and we see the soft blue of the city sky—the first and only image of sunlight shown in the entire film. Fallen Angels beautifully demonstrates cinema’s capacity to freeze time, capturing those fleeting moments of genuine human connection—of warmth—and preserving their ephemerality.

Lastly, it’s worth noting the controversial new changes made to the presentation of the film as a result of last year’s collaboration between Wong Kar-wai and Criterion to “restore” several of the director’s works. Of the restorations, Fallen Angels arguably received the highest number of alterations, including a wholly different aspect ratio (an anamorphic 2.39:1 instead of the original 1.85:1) and scenes originally in color either re-colorized or switched to black-and-white. According to Wong, these changes present in the restoration are more faithful to his original vision for the film; however, many fans disagree with the director’s decision to seemingly erase and replace the movie that they have long cherished and held within their memories. These objections are even more potent considering the current handover situation in Hong Kong and China’s long-standing history of media censorship. In response to these criticisms, Wong quotes Heraclitus, proverbially stating that “no man ever steps into the same river twice, for it’s not the same river and he’s not the same man.” Like his characters who desperately cling onto the nostalgia of the past, we too must learn to let go and approach Wong’s work through the lens of what it has always been about—the ephemeral.