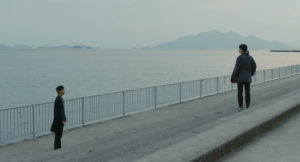 ​​Kafuku Yūsuke (Nishijima Hidetoshi) and Watari Misaki (Miura Tōko) stand on the shores of Watari’s hometown reflecting on the trauma of their lives and the landscape that surrounds them.

Drive My Car lives among many media: it’s a Japanese film that centers around a play by Anton Chekhov and is based on a short story by Murakami Haruki which is, in turn, named after a song by The Beatles. With such a complicated definition, it would be easy for the film to get away from itself and get lost in a web of its narrative and cultural influences. Luckily, director and co-screenwriter Hamaguchi Ryūsuke carefully grapples with these pressures and delivers a sprawling yet intimate vision of unconventional grief and emotional reconciliation.

The film follows Kafuku Yūsuke (Nishijima Hidetoshi), a stage actor who, two years after losing his wife, directs a new production of Chekhov’s Uncle Vanya, a play he himself once starred in when his wife was still alive. Assigned to him is driver Watari Misaki (Miura Tōko), a reserved young woman with whom Kafuku must spend hours each day on the rides between his hotel and the theater. These two characters then form the emotional core of the film as their stoic demeanors hold in the traumas from which they flee. Yet Nishijima and Miura’s performances are never flat or bland; nuanced shifts in their gaze, face, and posture reflect their inner turmoil hidden behind a seemingly composed exterior. Hamaguchi’s quiet yet deliberate direction gives the actors the time and space required to allow the spectator to notice these subtleties — to feel the tension from a glare that’s held for a few seconds too short or too long. However, Drive My Car does not just ride on the two central performances. Within the plot, several of the actors in the Chekhov play complicate Kafuku’s emotional landscape, and each performance adequately generates these complications. Among the supporting cast, though, Park Yoo-rim and Jin Dae-yeon shine as two Koreans whose sincerity and simple happiness create some of the most heartwarming moments of the film.

The world of the film, though, is so much more than the characters that inhabit it. Like the two lead performances, Hamaguchi presents a world bound up in ubiquitous conflict, whether that be conflict among place, time, or culture. Beautiful long shots of the strikingly red Saab 900 traversing the landscape of Hiroshima highlight the crisscrossing lines of the city that had to rebuild after the devastation of World War II. Like these roads they traverse, the central characters must carry the weight of the past that moves further away every instant. The three hour runtime of the film allows for these moments of traversal to gather the resonance they need. The film’s patience allows us to sink into its world so that by the end, the smallest emotional moments and intimate connections are monumental. Watching the warm lights of the night softly illuminate the urban world as the titular car quietly drives to the score’s cool jazz was, for me, one of the most cathartic movie watching experiences in recent memory.

However, the tension of the film doesn’t just rest in the film’s sense of place but also the cultural complexity in the diversity of the characters. The featured adaptation of Uncle Vanya is not just translated into Japanese. Rather, it’s a multilingual production featuring several Korean or Chinese cast members. Moreover, the cast includes a mute actress whose silence initially contributes to the film’s pervading sense of reservation but eventually manages to become more thematically and emotionally complex than any other secondary character. Though the constantly changing language of the film would perhaps have a larger effect if the viewer were familiar with at least one of them, the tensions between cultures remain palpable in the scenes of rehearsal. In fact, as an English-speaking viewer, I found myself in a similar position as the characters on screen forced to interact with and open up to a language, and thus a new life, beyond my comprehension.

Drive My Car lends itself well to such questions of identification and reflexivity, given its web of film, music, theatre, and literature. However, Hamaguchi embraces each medium and allows the film to be a celebration of the artistic process rather than a mess of artistic confusion. We see how the smallest artistic moments can lead to huge personal change and how the nuances of life arise in the art we create, whether that be on the stage, on the screen, or on the page. Though its premise is steeped in tragedy, the film manages to maintain a natural spirit of optimism and hope, making it a perfect film for our current moment. Drive My Car acknowledges the tensions across language, race, and culture and recognizes the ever-growing noise of modernity bearing down on a world stricken with a global threat, but it does so with patience and compassion. For example, the multilingual Uncle Vanya becomes a powerful tool to bridge these gaps as the different cultures represented find artistic harmony and a way to communicate onstage beyond their language. Beyond just the play, the interpersonal conflicts of the film find resolution in recognition of tensions across time and culture; the film encourages us to embrace our trauma and difference for a stronger emotional reconciliation.

Outside the world of the film, Drive My Car has continued to make a global impact. Earlier this year, it was nominated for four Academy Awards: Best International Feature Film, Best Director, Best Adapted Screenplay, and Best Picture. Being only the twelfth foreign film to be nominated for Best Picture in Oscars history, these nominations demonstrate the film’s ability to reveal culturally specific themes and form to a global audience as well as the gradual process of world cinema entering the American mainstream. Even though the reserved performances and direction contradict the more demonstrative and expressive dispositions of Hollywood, Drive My Car still struck a chord with the Academy and the countless critics who included it in their annual top ten lists. Again, Hamaguchi encourages a recognition of cultural difference as a means of reconciliation, and that’s precisely what this newfound spotlight allows. So long as American audiences do indeed recognize Drive My Car as a specifically East Asian film and don’t assimilate it into the landscape of Western film, then we may follow Hamaguchi in his optimism and work towards the film’s intercultural and interpersonal harmony. Fortunately, this optimistically multicultural cinematic landscape seems to be slowly arising in the West. Although only twelve international films have been nominated for Best Picture, three of them — Alfonso Cuarón’s Roma, Bong Joon-ho’s Parasite, and Drive My Car — were nominated in the last three years. This quickening pace of international recognition, including Bong’s film going so far as to win Best Picture, attest to our national attention shifting outside Hollywood and into the diverse and boundlessly creative world of global cinema.