Home / Uncategorized / News of the World

Tom Hanks Carries News of the World through Narrative Woes

*This review was originally published on Inside the Film Room* 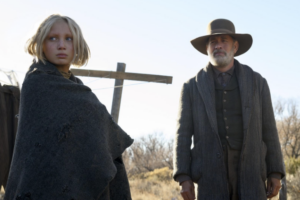 In the years since the runaway critical and commercial success of Captain Phillips, the career of director Paul Greengrass has been on something of a downward trajectory. In 2016, he returned to the franchise well for a fifth Bourne installment, but it received a relatively cool reception. Two years later, Greengrass struggled to find much of an audience – or much awards attention – for 22 July, his grueling recreation of the 2011 terror attack in Norway. Coming off back-to-back misfires, Greengrass reunites with Captain Phillips star Tom Hanks on News of the World, a quasi-revisionist Western that hit theaters on Christmas Day.

Disregarding the pandemic that continues to annihilate the theatrical film industry, News of the World would likely be a tricky proposition even in a normal year. Set in 1871 in Texas, Hanks stars as Jefferson Kyle Kidd, a war veteran who has taken up a new gig as a news reader. Simply put, for the small price of a measly dime, Kidd stages readings of newspaper clippings, both local and national, for weary laborers in small towns across the state. While traveling, Kidd encounters a horrific sight: the aftermath of a lynching, in which a Black man was murdered and his sole passenger, a young girl, was left for dead. The young girl’s name is Johanna (Helena Zengel); raised for several years by an Indigenous tribe after the murder of her family, she needs to be returned to an aunt and uncle in the state. She speaks no English and doesn’t seem to understand any other adults, making Kidd’s task particularly difficult.

Not necessarily planning to interrupt his own job schedule, Kidd initially balks at the task of returning Johanna to her home. But with no other options, Kidd eventually determines to take Johanna on the perilous trip all by his lonesome, dodging outlaws, treacherous conditions, and wagon mishaps along the way. Haunted by his own demons and struggling to connect with the child whose life is in his hands, Kidd eventually becomes emotionally invested in his own unexpected journey.

The plot itself is something of a mishmash of classic Westerns like John Ford’s The Searchers and Clint Eastwood’s Unforgiven, making Greengrass’ film feel a bit narratively familiar. A girl raised by a tribe, a journey to bring her home, a world-weary protagonist haunted by the violence of his past: these are not novel concepts in any regard. That’s not necessarily a death knell in and of itself – as with any genre, the Western ends up constantly recycling plot elements from its forefathers. Unfortunately, News of the World strains to generate much dramatic intrigue once its central narrative is established. Mostly humorless in its disposition, the film feels laborious and sluggish rather than light on its feet. The threat of a group of outlaws (who, for some demented reason, want to buy Johanna from Kidd) makes for a tensely compelling interlude, but there’s something tedious about the film’s very narrative framework, which drifts from sequence to sequence without much energy or verve.

There’s also a prominent political angle, one that’s unavoidable in a film set in the immediate post-Civil War era. How the film depicts those politics is slightly more contradictory and complex. In one regard, News of the World seems to profess a disappointing “both sides” perspective on the Reconstruction period. In an early scene in which Kidd is seen reading the news that the 13th, 14th, and 15th amendments must be enforced if Texas is to be part of the United States, his audience boos and jeers, growing visibly angry at the American troops in the building. Kidd calms the crowd with a simple platitude, claiming that everyone in the country is hurting. It’s a bit of an eye-rolling moment – throughout the rest of the film, Kidd is clearly an empathetic and tolerant man, but this moment feels like a cop out. Yet this centrist political sentiment is complicated by a later scene, in which Kidd goes off script during a news reading and seems to offer a more populist tone, subtly railing against the dictatorial leader of a small, male-dominated town and encouraging a form of union action. These nods are obviously meant to situate News of the World as a movie of the moment – whether its politics are sufficiently clear or legible is up for you to decide.

What ultimately saves the movie is Hanks’ performance as Kidd. It’s a role that, in many ways, plays to the actor’s strengths: as a gradual father-daughter tale and a meditation on loss, grief, and trauma, Hanks is able to play up the pathos of the character and his long and painful journey. While Kidd lacks the moral complexity of The Searchers’ Ethan Edwards or Unforgiven’s William Munny, that has never been Hanks’ strong suit; we may have to wait until his role as Colonel Tom Parker in the Elvis biopic for the actor to drift back into genuinely thorny territory.

Still, as the preeminent movie star of the silver screen, Hanks’ performance almost amounts to an eleventh hour rescue of the whole film. For much of its running time, News of the World fails to generate much momentum or excitement – visually, emotionally, or narratively. Shot by cinematographer Dariusz Wolski, some of the images feel vibrant and textured, but other times the film has a plastic and artificial feel, making the color palette as intermittently generic as the story itself. But when Greengrass and co-screenwriter Luke Davies give Hanks a chance to express the emotional core of Kidd – his regrets, his pain, and his traumatic history – the movie congeals. Watching Hanks traverse into emotional and introspective territory (in a scene with the great Bill Camp, no less!) remains a great pleasure; though the final moments of News of the World can’t match up to that final heartbreaker in Captain Phillips, Greengrass seems to know how to get the best out of Hanks.

Following its emotional climax, News of the World arrives at a predictable – and predictably upbeat – destination. Somehow, it works. If anything, Greengrass’ latest is a testament to what one powerful scene – and sheer star power – can do for a movie. News of the World struggles to generate a dramatic spark for much of its running time, but when Hanks takes charge, the pieces fall into place.