Abstract: HBO’s hit show Euphoria (2020 – ) delivers “Trouble Don’t Last Always,” the long-awaited special episode meant to sate fans who are excited for season two. The show returns to Rue Bennett, played by Zendaya Coleman, as she struggles with her drug addiction in the aftermath of season one. The episode follows her enlightening and self-reflective conversation with her mentor, Ali (Colman Domingo) in a diner. His determined, frank advice on Rue’s life pushes her to talk about her future, and how the people she loves fits into it. The limited setting – the pair stay in the diner – is a clever accommodation to COVID restrictions and allows Zendaya and Domingo to shine and bring life to serious, complex topics. 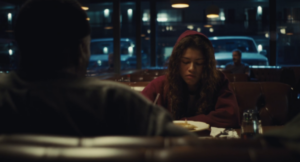 Rue (Zendaya) in the diner.

HBO’s hit television show Euphoria (2019-) is a lot to digest. A fresh face in the emerging ‘dark age’ of teenage drama, the series chronicles the lives of several high school students as they cope with life, love, sex, and trauma, all through the lens of the drug-addicted Rue Bennet (Zendaya). Landing on HBO in Summer 2019, it has become a phenomenon among younger audiences. With songwriter and music producer Labrinth’s genius underlying score, the compelling plot developments, innovative cinematography and Zendaya’s unflinching performance, there is plenty of justification for its popularity. Its mature themes and saturated color palate —a unique device used to exaggerate melodrama— make it a worthy and more realistic cousin to programs like Riverdale (2017-), Grand Army (2020-) and 13 Reasons Why (2017-2020).

Unfortunately, Season 2’s production was halted in March 2020 when the COVID-19 pandemic began. Such an unfortunate reality brought forth a new opportunity: with stricter filming and health protocols in place, Euphoria was forced to focus on character exploration in its holiday bridge episode, “Trouble Don’t Last Always.”

Shooting in one location is a particularly difficult feat for Euphoria, as any fan can attest to the show’s beautiful cinematography. The show deliberately leans into the absurd— Levinson describes the program as rooted in emotional realism— with extensive tracking sequences, bold color palettes, and its infamous whip pans. “Trouble Don’t Last Always,” the December 2020 bridge episode, abandons most of this, assuming a complete about face in terms of shooting. Gone are the elaborate score and sweeping camera movements, with tender, soft pushes and slow glides assuming their place. As a result, viewers are gifted with a definitively intimate episode that offers an unprecedented look into Rue’s psyche.

The episode picks up shortly after Rue’s overdose in the Season 1 finale, with her fantasy sequence of a dream life with Jules (Hunter Schafer) literally sliding into reality: Rue enters their apartment’s bathroom, consumes drugs, and emerges from a diner’s bathroom. There, she meets with her sponsor, Ali (Colman Domingo), over a stack of cold pancakes for a visceral dialogue about addiction, forgiveness, and life itself.

“Trouble” still retains Euphoria’s signature sense of beauty, only it finally found the show’s strengths in the absence of its chaotically colorful aesthetic. Following the bridge episode’s premiere, audience reception was polarized as some viewers hoped for a full return to form. Aside from having to follow COVID-19 restrictions, this episode felt much more self-contained because it focuses on Rue in an unprecedented way. Highlights of Season 1 recall heightened moments where she finds herself in a days-long depressive state or erratically threatens to kill her mother (an incident she discusses with Ali), but these emotional extremes were offset by plot developments involving other characters. With the show’s trademark shallow focus intact, this diner conversation with Ali allows Rue to ask large questions, such as what the meaning of life is, and what she thinks of herself when she harms others with her addiction. The blocking is incredibly simple this time around, and Levinson’s intimate over-the-shoulder medium-closeups keep us close in the conversations that unpack Rue and Jules’ codependency. It is an abrupt and welcome change of pace for Euphoria, a show where viewers are quick to get swept in the salacious content and forget its heart. 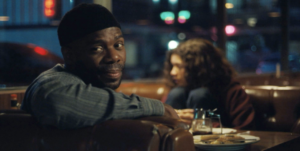 Perhaps the most poignant moment of the episode—and there are plenty, from Ali’s phone call with his estranged daughters to Rue identifying her self-hatred—came when Ali spoke to Rue about her refusal to forgive herself for the damage her addiction has caused. “People keep doing shit that we deem unforgivable, and in return, they decide there’s no reason to change,” he says, “So now you got a whole bunch of people…who don’t give a fuck about redemption.” While he is speaking to Rue about self-forgiveness, the message is certainly universal. 2020 was illuminating above all else in its reveal of glaring inequities in fields from law enforcement to health care. The stresses of the pandemic, the aggravation of a presidential election, and the unjust killing of George Floyd, Ahmaud Arbery, and Breonna Taylor, created a groundswell of pain and frustration in the United States. In short, the world is a messy place, and most of us play a hand in its convoluted, less-than-ideal state. We’ve always wanted progress, but haven’t been able to truly achieve it for reasons Ali tells Rue. If we can forgive Rue for threatening to kill her mother in an erratic state, can we extend that same forgiveness to those who commit wrongdoings against us and members of marginalized communities? If not, where do we draw the line? How do we balance accountability with forgiveness? These are the questions Euphoria asks.

The episode accomplishes plenty while leaving much to explore in Season 2. Ali helps Rue realize that her connection with Jules (she didn’t realize the two of them were never in a committed relationship) will make her unstable in her road to sobriety, which according to Ali is her “greatest weapon.” Social movements and the performative activism within are also discussed, no doubt a nod to the racial injustice protests of 2020. However, with this major character exploration undeniably shifting the trajectory of Rue’s future movements, Euphoria will have to confront her and Jules’ toxicity. As we continue to face the flawed state of our country, I hope that we and Rue can keep Miss Marsha’s (Paula Marshall) titular line in mind: “Trouble don’t last always.”