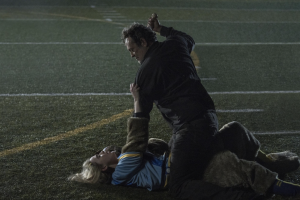 One cannot emphasize this enough: Freaky is fun. Chock-full of horror references from The Shining to Friday the 13th and Halloween, Happy Death Day director Christopher Landon’s newest collaboration with Blumhouse and Universal Pictures is a love letter to horror that aims for more laughs than screams. And, despite stumbling on attempts at familial drama and slightly fewer kills than we’d hoped for, it delivers.

Earlier this week, Aspect had the opportunity to sit down with stars Vince Vaughn and Kathryn Newton at a virtual roundtable with other student journalists around the country. The roundtable covered their experiences on-set of the long-standing but quickly ascending comedy/horror genre, and what they described as the film’s ultimate message of self-acceptance.

The film centers on Millie (Kathryn Newton), a bullied teenager with two best friends, an alcoholic mother, a cop sister, and a dead dad. On homecoming night, she is attacked by the infamous Blissfield Butcher (Vince Vaughn), which prompts a body swap. Commence antics for the next 103 minutes.

Freaky falls into the same trap that many body swap or age-up films suffer from in that the swapped personality has little consistency between the switches. Kathryn Newton’s Millie is timid walking down the hallways, shying away from even the possibility of being bumped into. As the film wants you to know, she’s painfully normal, with her only stand-out features before the switch being that she dons the school mascot outfit and has a tardiness problem. But Vince Vaughn’s Millie is quirky and significantly more energetic. She talks to herself and makes funny quips in moments of stress—many of which seem improvised and actually result in some of the funniest lines in the movie.

Playing a demure teenager and a psychopathic 40-something was a balance that both actors had to learn how to strike, but one that they claimed was achievable with practice and earnestness.

“I didn’t watch any other performances [of teenage girls],” Vaughn explained. “I really wanted to take the authentic journey of creating this character and having an emotional depth.”

As for the purposes of comedy, Newton said Vaughn taught her to take it all from the page.

“[He reminded me] to really play the reality of the scene and to keep it as grounded as possible,” Newton said. “Because then it’s funnier.”

And the comedic aspects she’s referencing are the most important parts. The personality disparity isn’t a big problem. We barely see any of pre-switch Millie, and the joy of the body switch trope, in this case, is not seeing two people act perfectly like one another, but in the circumstances around that switch. It doesn’t really matter if Vince Vaughn is perfectly embodying Kathryn Newton in one scene when you’re watching her push a man through a table saw in the next. 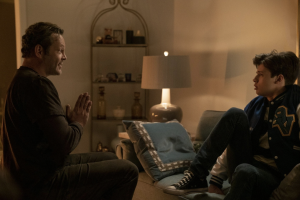 The kill sequences and small gags from Vaughn are certainly the best parts of the movie. Laugh-out-loud moments are peppered here and there, but Vaughn is the highlight of every scene he’s in and would be enough to keep up the humor alone (and he almost does).

Christopher Landon gave both actors room to make their own choices and for a veteran comedic actor such as himself, this put Vince Vaugn right in his element. Newton said the improvisation was new for her, but it ended up being freeing in the context of horror and comedy.

“It was fun to improvise and be in the moment,” she said. “To find what is going to work [in the scene], so much of that you can’t plan for. And so the rest you just be scared.”

Kathryn Newton, in the middle of what seems to be a rise in popularity in the Gen-Z crowd, works well in the role. She doesn’t do much talking as the Butcher to the point that nearly anyone could have replaced her, but she flawlessly integrates the action setpieces into her character and works well on both sides of the physicality spectrum. 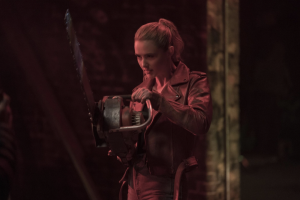 Newton as the Butcher in Millie’s body – Universal Pictures

Christopher Landon told Kathryn Newton when she was cast that “he saw a killer in her,” and he was right. As the nervous teen and confident killer, she sells the characters fully.

“[I played the Butcher the way] a grown-up might think a teenager might act,” Newton said. “It was another layer of playing the Butcher as a man, but the Butcher [acting as] a girl.”

While Vaughn and Newton are strong, unfortunately the same can’t be said for Millie’s two best friends (Misha Overoshic and Celeste O’Connor). The pair’s acting is fine but, outside of some decent one-liners, the jokes either fall into the “we must acknowledge political correctness” category or simply don’t land. However, their screen time is limited and often shared with Newton or Vaughn, and their presence only serves to move the plot along rather than any emotional or comedic arc, which fits the movie just fine.

The most unfortunate issue in the film is the attempted emotional arc as related to Millie’s family. The one significant (and nearly the only) scene we see as an attempt to confront her familial conflict screeches the pacing to a halt. The entire subplot of her issues between her mother and sister could have been completely erased from the film and made no impact. Luckily, very little runtime is dedicated to it. But, boy, do those few minutes drag on.

The other major issue to me was one I didn’t expect to have: I wanted to see more kills. The opening scene promises an entire runtime of creative and almost Final Destination-esque murders (a certain clever use of a wine bottle stands out). Outside of one scene, though, the Butcher-as-Millie kills are few and far between and aren’t nearly as satisfying. The film certainly doesn’t shy away from its R-rating, but if they had let Millie’s Butcher kill just a few more teens and dared to be just a little bloodier, maybe this could have been a new horror classic.

Though it’s riddled with character tropes, the plot itself is unique and entertaining enough to carry the fun through to the end. The idea of a body swap happening not only between disparate generations (which we’ve seen plenty of before) or different genders, but between a serial killer and the perfect person to get closer to victims is a fun and dynamic twist on the formula.

In the roundtable interview, both Newton and Vaughn said playing two vastly different characters became an exercise in self-discovery.

“When Millie sees herself from another perspective, she looks at herself and it’s the first time she’s seeing herself,” Newton explained and added that playing the role did the same for her. “It made me look at myself with a lot more love.”

“Life’s about becoming comfortable with who you are and owning it,” Vaughn added. “Versus becoming someone else.”

Freaky is in theaters on November 13th, 2020. The film will be released on VOD later this year.

The other student journalists at the roundtable, and whose questions contributed to this article, included the following: