Home / Essays / Claude Wilson – Fascism, the Phallus, and the Grotesque in Dr. Strangelove 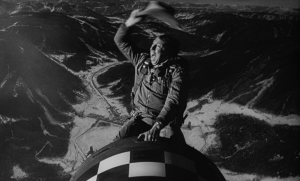 Throughout the films of Stanley Kubrick, the intertwining of erotic sexual desire and self-destructive violent impulses is a recurring motif. In his survey of the director’s work, James Naremore observes that “few directors have been more critical of military and scientific institutions, more sharply attuned to the fascistic tendencies in male sexuality and more aware of how machines function in male psychology as displacements for Eros and Thanatos” (4). Similarly, Naremore suggests that Kubrick frequently engages with the “grotesque,” a concept which he characterizes as “exclusively preoccupied with monstrous or repulsive images of the human body” (27). These themes are especially apparent in Kubrick’s 1964 Cold War satire Dr. Strangelove or: How I Learned to Stop Worrying and Love the Bomb, in which phallic mise-en-scène and grotesque imagery emphasize the connection between militaristic fascism, heteropatriarchal male sexuality, and the genocidal-suicidal “death drive” that they facilitate.

In a chapter entitled “Wargasm,” Naremore observes how phallic imagery pervades Dr. Strangelove “from the opening credits, which show a distinctly phallic refueling rod being inserted into a B-52 as ‘Try a Little Tenderness’ plays on the soundtrack, to the astonishing climax, when Major Kong exultantly straddles a nuclear bomb that looks like a huge phallus. Throughout, nuclear war is a hard-on for the men who wage it” (Naremore 125). Indeed, Naremore has remarked that the iconic scene of Major Kong (Slim Pickens) riding the bomb is one of many “shots that can be used to represent [their respective] film” across Kubrick’s works, managing to encapsulate the film’s themes in a single, memorable image (8).

The shot of Major Kong riding the nuclear bomb to his death is initially a medium close-up showing Kong from around the waist up, enthusiastically waving his wide-brimmed hat in the air and gleefully hollering. The scene resembles a rodeo, reinforced by Slim Pickens’ own background in rodeo performance, emphasizing Major Kong’s cartoonish “cowboy” persona, an archetype of idealized American masculinity rendered farcical. As Major Kong descends, he takes up less and less of the screen, while the bomb that he bestrides comes to dominate the frame. As Naremore suggests, the bomb between Kong’s legs resembles a massive phallus — one so huge that it completely dwarfs him. This priapic figure of a man completely overshadowed by his mock-genitalia exemplifies Kubrick’s use of the grotesque. In this case, the deployment of the grotesque by framing the bomb as a gigantic phallus even larger than its “owner,” suggests that there is a direct connection in male psychology between heteronormative erotic desire, as signified by the exaggerated image of the phallus, and an instinctual “death drive” towards violence and self-destruction represented by the bomb itself and Kong’s “suicide.” The scene ends with a cut to a nuclear bomb going off as Kong reaches the ground, functioning as both the literal and metaphorical “climax.” 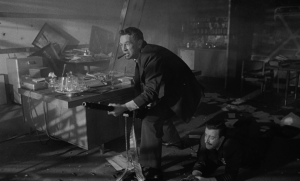 These themes from the nuclear rodeo scene can also be found throughout the film in the character of General Jack D. Ripper (Sterling Hayden). Like Major Kong, the character of General Ripper is defined by American machismo, and the gung-ho military commander is heavily associated with phallic mise-en-scène. Throughout the film he is shown puffing away on a cigar, and he retrieves a comically oversized machine gun from a golf bag when U.S. military forces attempt to reclaim the Air Force base from his control. General Ripper is motivated to go rogue and launch a nuclear attack against the Soviet Union by his anti-communist paranoia over fluoridation, but this paranoia stems from an incident “during the physical act of love” when he is overcome by “a profound sense of fatigue.” In Dr. Strangelove, the world ends suddenly and violently in a nuclear catastrophe all because of a single, powerful man’s sense of sexual inadequacy. Ripper’s libidinal anxieties are tied to his over-the-top, hypermasculine violence, as well as his self-destructive tendencies. In addition to being the catalyst for nuclear apocalypse when the U.S. military takes back his base, he commits suicide. The way that the general’s right-wing militarism is fueled by unfulfilled erotic desire and ultimately manifests in suicidal violence parallels the way in which, throughout the film, American social institutions are driven by heteropatriarchal libido towards fascism and technologically facilitated mass death.

These themes are explored most explicitly in the concluding scene. After the bomb that Major Kong is riding detonates, there is a cut back to Doctor Strangelove (Peter Sellers) in the War Room, swiveling around in his wheelchair in a circular motion that echoes the shape of the mushroom cloud. This visual doubling suggests a connection between this nuclear apocalypse and the character of Strangelove, a Nazi scientist integrated into the American political elite as a top military advisor. With nuclear apocalypse looming, Dr. Strangelove advises President Merkin Muffley (Peter Sellers) to begin rebuilding society deep underground with a “nucleus” of human survivors, which brings the president some concern: “Well I… I would hate to have to decide… who stays up and… who goes down.”

“Well, that would not be necessary Mr. President.” The doctor replies, leaning to his right as he is shown in a medium long shot, surrounded by men in suits whose faces are obscured in shadow. “It could easily be accomplished with a computer. And a computer could be set and programmed to accept factors from youth, health, sexual fertility, intelligence, and a cross section of necessary skills.” There is then a cut to a medium close-up of Strangelove, leaning further right and grinning. The doctor continues, noting that “of course it would be absolutely vital that our top government and military men be included to foster and impart the required principles of leadership and tradition.” The implicit irony in this scene is that this nuclear apocalypse was brought about because the world-destroying “doomsday device” is linked to an automated computer that is immune to the type of “human meddling” that Strangelove despises. Still, Strangelove advocates for more technological automation in response to the problems that it has already caused. Conveniently, the global catastrophe that Strangelove’s mode of thought has brought about now justifies the implementation of the eugenicist, fascist order that he clearly desires.

As he says this, there is a reverse shot of Muffley and General Turgidson (George C. Scott), who appear receptive to his suggestions, before a cut back to the same medium close-up of the doctor. Finishing his sentence, Strangelove slams down his left hand as there is another cut, this time to another medium long shot of him as he raises his gloved right hand in a Nazi salute reflexively. In addition to being a clear visual indicator of the fascist ideology underlying this new order, the involuntary nature of the salute gives it the connotations of an “erection” motivated by libidinal desire.

Much like the character of General Ripper, Strangelove represents murderous fascism as a product of sexual pathology. This is made explicit as he elaborates that this new subterranean society will require the implementation of “proper breeding techniques and a ratio of say, ten females to each male,” a concept which echoes the Lebensborn breeding program organized by the Nazi Schutzstaffel and reinforces the central role of the patriarchal sex drive in fascist ideology. As he continues to elaborate on his bold vision for the future and assuage Muffley’s concerns over the trauma of countless deaths, he struggles with his black-gloved right arm that outwardly expresses his fascist libido, attempting to beat it into submission.

As he insists that the underground survivors will push forward with “nostalgia for those left behind, combined with a spirit of bold curiosity for the adventure ahead!” his gloved hand snaps back into another reflexive Nazi salute, which he forces back down into his lap and attempts to beat again, reinforcing the connotations of an “erection” that gives away his “arousal” for this new ultrapatriarchal dystopia. Strangelove’s struggle with his own body is another example of Kubrick operating in the realm of the grotesque. In his chapter on the subject, Naremore observes that “in all its visual and verbal manifestations, however, the grotesque is structured by a dual implication…. Its defining feature is what Philip Thompson describes as an ‘unresolved’ tension between laughter and some unpleasant emotion such as disgust or fear” (27).

Here the comedy of the doctor’s inability to hide his obvious fascist tendencies is inseparable from the way that it also unsettles and disturbs. Similar cases in Kubrick’s work would be Jack Torrance (Jack Nicholson) in The Shining (1980), who grins and shouts Johnny Carson quotes as he attempts to murder his wife and son with an ax, or Alex DeLarge (Malcolm McDowell) in A Clockwork Orange (1971), who leads his “droogs” in home invasions wearing codpieces and phallic masks while reenacting musical numbers or wielding a huge ceramic penis as a weapon. Kubrick deploys the grotesque to depict the monstrosity of these characters in a darkly humorous manner and associate their underlying motivations with the base and bodily — none of these characters seem to be driven by any higher function that might differentiate them from the ape (Daniel Richter) in Kubrick’s 2001: A Space Odyssey (1968), who exults in the power of wielding a bone-club in a “grotesque” scene depicting humanity’s discovery of the technology of violence set to the triumphant sounds of “Also Sprach Zarathrustra.” 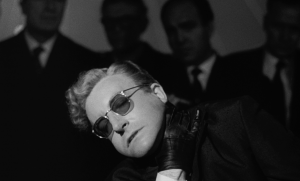 Strangelove’s grotesque nature is expressed further with a cut to a medium close-up of him, the frame fragmenting his body as his gloved hand reaches up and begins strangling him, resembling auto-erotic asphyxiation. The existing associations of the gloved hand with libidinous and fascistic desires are connected to another desire, a suicidal death drive. Just as Major Kong and General Ripper are driven by their reactionary machismo to their own deaths and Strangelove’s overtly fascist gloved hand attempts to strangle him, civilization in Dr. Strangelove is metaphorically driven to suicide by militaristic patriarchal institutions that sublimate and displace its erotic desires into deadly weaponry.

In the final scene of the film, Strangelove stands up from his wheelchair, another visual parallel to an erection, and exclaims “Mein Fuhrer, I can walk!” before a cut to a montage of nuclear explosions set to Vera Lynn’s “We’ll Meet Again.” The scene ties the ongoing motifs of the film together as the subliminal sexual imagery of erection and orgasm aligns with a symbolic revival of fascism followed by nuclear detonations signaling civilization’s “suicide.” Throughout Dr. Strangelove, the twin impulses of the libido and the death drive are presented as dominant and intertwined in the institutions of the military, government and science. As such, patriarchal civilization is destined by its foundation on sublimated erotic desires and anxieties towards an ultimate fate of fascism and self-destruction.